Clavinova CLP 200 Review Series: Article 2 of 5
By: Hiram LeCedre—September 07, 2008 03:16PM
"In our opinion, the 3-level dynamic piano stereo samples with sustain and key-off samples plus DDE not to mention twice as many voices, a beefed up sound system makes the CLP 240 the better value of the two." 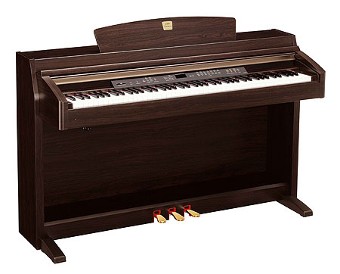 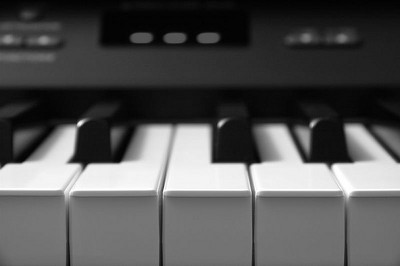 Today's article continues our 5-part review series on the Clavinova CLP line at YamahaMusician.com. We'll be covering the CLP 230/240.

The Clavinova CLP 230 is the next step up from the CLP 220. The CLP 230 has more voices (14 total), a more sophisticated effects processor, half-damper pedaling, the new Graded Hammer 3 piano keyboard, a more capable recording mode, more song memory, AUX in/out and USB to host connections. This is in addition to it having 64 notes of polyphony, and the two 20W onboard speakers as the CLP 220.

What about the Clavinova CLP 240? Well, in addition to the features of the CLP 230, the CLP 240 has 28 voices, Dynamic Damper Effect, two 40W speakers, and USB to device connection. But, the most exciting new feature of all on this model is the 3-level dynamic stereo samples—we'll talk about this exciting feature in just a moment. And just like the CLP 220, the CLP 230/240 come in polished ebony, dark rosewood, mahogany, and, cherry to match your décor.

Graded Hammer (GH3) technology mimics the touch and responsiveness of a real piano by having a heavier touch on the bass portion of the keyboard and becoming progressively lighter going up the treble region. This is an awesome feature for pianist and we absolutely loved the way this GH3 keyboard felt.

The CLP 240 Grand Piano 1 voice features an amazingly realistic acoustic piano. Yamaha achieved this with their 3-level dynamic piano stereo samples, sustain and key-off samples. (In other words, Yamaha actually recorded someone playing a real Yamaha grand piano striking the keys soft, medium, and hard. Plus, they added sustain and key-off samples which adds subtle nuances for a very pleasing piano—see the video below to hear for yourself.)

The Clavinova CLP 230 comes with 14 different voices which include acoustic and electric pianos, church and jazz organs, choir, guitar, bass, and more. The CLP 240 comes with a VARIATION button just to the right of the voice buttons. The VARIATION button doubles the number of voices to 28 on the CLP 240 (it's sort of like the 2nd or shift button on your calculator). It's really Yamaha's way of keeping the cluster of voice buttons down to 14; however, each variation is a different voice. For example, the "normal" guitar voice is a "warm and natural-sounding nylon guitar"; however; the "variation" guitar voice is a "bright, brilliant steel guitar". The manual does a good job explaining the tonal differences of each one if you get lost or confused.

The Clavinova CLP 230 and CLP 240 come with a 2-part recorder. This 2-part recorder is very useful for those who want to record a duet or record left-hand and right-hand parts of a song separately. Plus, the CLP 230/240 can hold up to 3 user songs at a time. The CLP 240 even allows you to attach a USB drive so you can save your compositions to make more room for new recordings—it's a great feature!

Other Features: Half-damper and DDE

The Dynamic Damper Effect (DDE), too, is a really cool feature on the Clavinova CLP 240 that adds more realism by adding sympathetic resonance to the piano while the sustain pedal is down.

In addition to the same cool reverb effects that are found on the Clavinova CLP 220/230/240, the CLP 230/240 adds more to the list. How about chorus, phaser, tremolo, and rotary speaker effects? You can do lots of cool things with these effects and create new inspirations for song ideas!

We were very pleased with the upgraded features to the CLP 230/240 but particularly to the CLP 240. In our opinion, the 3-level dynamic piano stereo samples with sustain and key-off samples plus DDE not to mention twice as many voices, a beefed up sound system makes the CLP 240 the better value of the two.