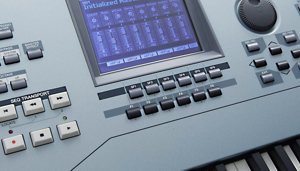 When Yamaha came out with the original Motif workstation back in 2001, it set a new standard with its sonic capability and real-time performance features making it the professionals' choice in a music workstation. Since then, Yamaha raised the bar by debuting the Motif ES (Extensive Sonic) in 2003. Yamaha upped the ante with an additional 180MB of waveforms compared to the Motif ES and more than doubled the polyphony to 128 voices from the original Motif. In its latest evolutionary change, the new Yamaha Motif XS is impressive. From its 355MB of waveforms, eight real-time knobs and sliders to its sampler, arpeggiator, and massive color LCD screen, this production music workstation is one of the most powerful keyboards we've ever tested.

If you've read our articles in the past, you know that we love great piano sounds. The Yamaha Motif XS series delivers some of the best piano sounds that Yamaha has to offer. Combine that with the 88-weighted key, XS8, this was truly a drooling experience.

When you first turn on the Yamaha Motif XS series, the default program is the Full Concert Grand program, and, for good reason...it will take your breath away. We loved the Romantic Piano program—very warm and expressive, however, the Piano with Strings program can get too muddled with strings if you don't lift up on the sustain pedal frequently. One of our very favorites was the 1968 Piano program. Wow! It felt like we were playing a piano that was recorded with 1960's recording technology—very warm and fuzzy. The Blues Piano program was just the perfect program for bluesy music.

The Yamaha Motif XS guitar programs are also worth mentioning. We loved the Barcelona Guitar program which inspired flamenco rhythms and melodies. The organs, too, were quite good as well as the pads. We didn't care too much for the saxes, though.

A keyboard can have all the knobs, sliders, and a great big color display and still not be all that. Well, not to worry because the Yamaha Motif XS series is both all show and go. We tested the Motif XS8, the 88-weighted key balanced hammer model. Yamaha arranged the user interface in an organized fashion. The left side is where all your performance and tweaking occurs--your knobs, sliders, effects, sequencer, and arpeggiator controls live here while the right side house the sound bank categories, navigation, and various modes such as VOICE, MIXING, and SAMPLING modes.

The Yamaha XS series come in three different flavors: The XS6 (61-keys), XS7 (76-keys), and the XS8 (88-weighted keys). All Motif XS keyboards have the same features and capabilities. The only exception to this is that Yamaha chose to give the XS8 FireWire capability as a standard feature and optional for the XS6 & XS7.

First off, Yamaha simplified the complex Motif XS by arranging it into nine major modes: VOICE, PERFORM, SONG, PATTERN, MIXING, SAMPLING, UTILITY, MASTER, and, FILE. For example, use VOICE mode if you just want to play a single voice, use PERFORM mode if you want to layer voices (up to four) together and/or split them across the keyboard or depending on key attack velocity, and use SONG mode to use the on-board sequencer.

When we sat down and played the Yamaha Motif XS, one of the first things that caught our eyes were the eight assignable knobs and sliders. For example, you could have the knobs tweak the cut-off, resonance, attack, sustain, decay, and release while other knobs could be used to tweak the effects and EQ of your sounds giving you full control of every aspect of your sounds. Not forgetting to mention the Motif XS has aftertouch, a touch and directional sensitive ribbon controller, pitch and modulation wheels, two assignable function buttons and connections for two assignable footswitches, and two continuous foot-controllers. We wished the mod, pitch, and ribbon controllers could have been assignable for added flexibility too.

If you are so inclined, you could create, edit and mix your sequences and patterns straight from the Motif XS interface. But, why do that when Yamaha was so gracious to bundle Cubase AI with the Motif XS? Use Cubase as your full-featured music production studio to edit and record your sequences and mixes straight from your computer. All the sequencing editing tools that you can ever need are here. From quantizing, copying, editing, deleting, to modifying control changes and data are at your fingertips. The Motif XS interfaces to Cubase using the IEEE 1394 FireWire connection on the XS8 (optional for the XS6 and XS7).

Wrapping up the Yamaha Motif X8's features are the arpeggiator and sampler. You can use the arpeggiator to record your patterns—up to four simultaneous arpeggios can be toggled at once. A staggering 6,000 preset arpeggios types and room for 256 user arpeggio types are available. The sampler can be used to record your vocals or any other instrument via a microphone. The Motif X8 even includes a vocoder allowing you to create a "robot voice" effect while singing into a microphone. These samples can be used to record arpeggios and create audio tracks via its integrated sampling sequencer.

To record audio, however, you will need to install two DIMM memory chips (2 x 512MB) since the Yamaha Motif XS doesn't come preinstalled with them from the factory. We found this to be an inconvenience since the sampler is a standard feature on the Yamaha Motif XS series and using the sampler requires the use of DIMM chips for recording. Besides, DIMM chips these days are inexpensive and Yamaha should have gone the extra mile to load the Motif XS with them.

Yamaha raised the bar again with the Motif XS series.  From the expanded sound set vastly improved UI, and sampler to the wealth of assignable controllers, sophisticated sequencer and bundled audio software, Yamaha has taken inspiration to a whole new level. However, there are some things that we would add and change. We would have liked to see aftertouch, pitch and mod wheels, and the ribbon controller be assignable. We would have liked it if Yamaha loaded the Motif XS series with the maximum 1GB of memory and made the IEEE 1394 FireWire connection a standard feature for the XS6 and XS7 models.

Discuss in our forum