By: Hiram LeCedre—September 27, 2007 5:10PM
"The Yamaha P140 is Yamaha's answer to a great feeling and sounding digital piano at an affordable price!" 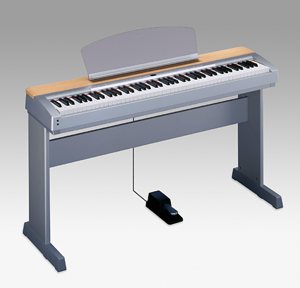 I think most musicians would agree that Yamaha knows a thing or two about making a great piano. They aren't number one by accident. Well, the Yamaha P140 is Yamaha's answer to a great feeling and sounding digital piano at an affordable price. However, the Yamaha P140 isn't just a piano--it has electric pianos, organs, an on-board sequencer to record your music, reverb, and an effects processor too.

When we sat down to review the Yamaha P140, we were surprised by the very natural keyboard feel. Yamaha calls this their Graded Hammer Technology (GH). In a nutshell, like a real piano, the weight of the keys on the bass side is heavier than on the treble side. The result? A fantastic feeling digital piano that articulates the nuances of your playing dynamics while building confidence.

Now, for some specs: The Yamaha P140 has 14 different voices that range from pianos, electric pianos, organs, to a harpsichord, and strings. The P140 has 64 voices of polyphony which mean the maximum number of simultaneous voices that can be played at once without any voices cutting out. For playing solo piano, 64 voices will be plenty however, if you have two voices layered, say strings and piano, then your maximum polyphony will be 32. The P140 also has 50 preset songs you can practice with, a two part sequencer, timbre selector, reverbs, effects, touch control setting, music rest, AC adapter, and comes with the FC-3 sustain pedal which senses how much damper you want; useful for half-damper playing techniques.

The heart of the Yamaha P140 is the piano sounds—and they are good. Yamaha used dynamic stereo sampling to achieve this by recording a real Yamaha concert grand at three different dynamic levels: soft, medium, and hard playing styles while capturing the stereo ambience. In addition, Yamaha took a few extra steps to achieve even more realism by recording release key samples, and sympathetic resonance which you can really notice in the high treble range with the damper pedal down.

What is a Yamaha digital piano without the electric pianos? Yes, thankfully Yamaha added electric pianos too. From hammer-struck metallic tines to FM synthesized electrics, you will instantly remember hearing the same pianos used in Pop, R&B, and Jazz styles.

The Yamaha P140 also comes with a couple organ programs that are great for Jazz and Church music, and among other sounds including a vibraphone, harpsichord, strings, and an electric clavichord.

It's a Piano Teacher Too?

The P140 has a great feature for piano students. Fifty popular piano pieces from Mozart, Beethoven, Chopin, Schumann, etc are preloaded from the factory. When playing them back, you can mute the left or right hand parts so you can learn each part independently—this makes learning pieces a lot faster and easier. In addition, you can also set start and end points anywhere in any song, so, for example, say you've been having difficulty learning a particular phrase from Fur Elise. All you do is select Fur Elise and play it, then press the TEMPO/FUNCTION button at the start of the phrase you want to learn and press the TEMPO/FUNCTION button at the end of the phrase. This will set your start and end points and the P140 will now only play that segment and repeat it as many times you want..

You can also record what you've practiced or record a new composition on the Yamaha P140. You can even record the left or right hand parts independently and then have them play together. Recording is very easy; press the REC button to engage, press the PLAY/PAUSE button to start, then press the REC or STOP button to stop recording. Recording the left or right hand part is just as easy; just press the LEFT or RIGHT button after pressing REC to record each hand independently. Last but not least, you can back up your songs to your computer via MIDI.

The Yamaha P140 gives you the ability to tweak your sounds. The VARIATION button allows you to adjust the timbre of your sounds from mellow, normal, or bright. The REVERB button allows you to adjust the amount of reverberation by selecting from a hall, room or stage—it gives you the feeling of playing the piano in one of these environments and touch control adjusts the sensitivity of the keyboard from soft to hard.

The Yamaha P140 also has an on-board metronome, transpose function, seven different scales to choose from, and a fine tuner to adjust the P140's pitch in case you decide you want to play along with your favorite CD or another fellow musician.

The best part of the Yamaha P140 is the piano sounds—they are so authentic and playable. They will inspire music to pour out of you. The other sounds are good but, it's the piano that makes the P140 sparkle. We didn't understand why Yamaha included a harpsichord program--maybe they were trying to appeal to Baroque music fans. In addition, Yamaha could have beefed up the on-board speakers a bit as they can buzz if you play them too load but they are decent for most situations, and besides, you can route the P140 to an external system anyway.

We definitely think this digital piano is a great choice for a music student—it will build confidence and inspiration and it's fun to learn the on-board songs. From the quality of sounds, to the touch of the keyboard, and its price tag, the Yamaha P140 is an outstanding value and would make a great first digital piano for the music student in the family.