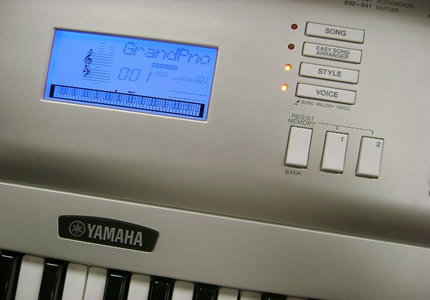 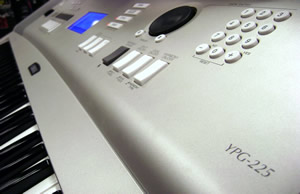 If you're like us and love the YPG625/525 but you're on a really tight budget (or you're a starving musician), Yamaha now has the perfect answer for us—the Yamaha YPG225.

The Yamaha YPG225 (aka Yamaha DGX220) is the 76-key equivalent of the award winning 88-key Yamaha YPG625/525 digital pianos.  Virtually all the same features found in the YPG625/525 are also in the YPG225. These features include a six-track sequencer, nearly 500 voices, 32 notes of polyphony, pitch-bend wheel, dual and split voices, USB connectivity,  the Yamaha Education Suite, and, effects processor.

If you're in search of great and playable grand pianos, electric pianos, and, hundreds of other sounds, the YPG225 delivers. It even comes with 12 drum kits and special effect sounds, such as, fret and breath noises, explosions, even car tires squealing! The pianos, electric pianos, and strings impressed us with their realism—they are nearly as good as the Clavinova sounds while sounds such as the violin—that have built in vibrato were okay. For those of you who play guitar, sax, and synth leads, the pitch wheel will come in as a great way to add expression to your performances and compositions.

The YPG225's six track sequencer has five performance tracks and one accompaniment track. Yamaha designates track 1 to record your right-handed parts and track 2 for your left-handed parts, tracks 3-5 for any other melodies, and track 6 for accompaniment.

Recording was very straight forward and intuitive—just select the track you want to record and press the Record button. If you make a mistake, just repeat the same step and your new recording will erase the old one. Unfortunately, the YPG225's sequencer doesn't have the Quantize feature that's found on the YPG625/525 (quantizing allows you to add precision to your recordings by "snapping" notes to the nearest 1/2, 1/4, 1/8... beat—useful for rhythm tracks), however, you still can mute individual tracks.

Just like the YPG625/525, the YPG225 comes preloaded from the factory with 70 type 0 midi songs included on the CD-ROM. These songs include pieces by Beethoven, Mozart, Chopin, and Pachelbel. The lesson feature allows you to learn the left and right hands separately and even grades your performance! You can of course use any midi song for a lesson just as long as it is a type 0 midi file. The Owner's Manual does a good job of explaining how to download these files onto the YPG225.

In addition, the YPG225 comes with an extensive chord dictionary. Say, for example, your piano or band teacher wants you to practice playing a GM7 (G major seventh), the YPG225 will show you what notes to play and will even display the musical score for you. However, that's just the beginning. The YPG225's chord dictionary goes further and displays M, (9), 6, mM7, M7, m, m(9), m6, m7(9), dim 7ths and 9ths, augmented chords and more—it's very extensive and perfect for learning piano and music theory. We were very pleased with the Yamaha Education Suite—it's very complete and impressed us with how easy it was to use.

Other features of the YPG225 that are worth mentioning are the effects processor which is complete with reverbs, chorus, and harmony effects.

Performance assist, auto accompaniment, music database, and USB connection—for backing up your compositions, downloading and sharing music to and from the YPG225.

We absolutely loved playing the Yamaha YPG225. Yamaha has virtually retained the same features and sounds from the YPG625/525 but at a fraction of the cost. Really the only differences to the YPG225 are the 76-keys, the smaller LCD screen and the FC5 footswitch, keyboard stand, and, AC adaptor are now optional (standard for the YPG625/525). The YPG225 takes six D cell batteries.

The bottom line with the YPG225? If you're looking for a stripped down, bare bones and smaller version of the YPG625/525 with the same sounds and features at a fraction of the price, the YPG225 won't disappoint.